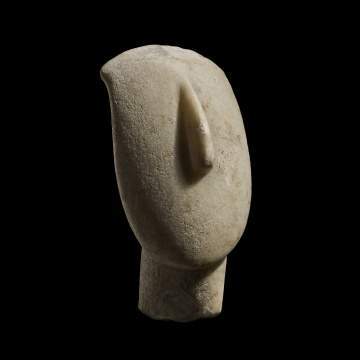 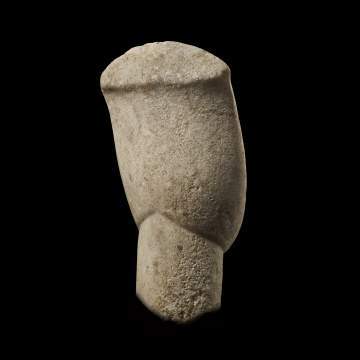 These so-called Cycladic figurines or idols come from the homonymous Greek island chain in the Aegean Sea, where they were discovered in select graves. They almost certainly fulfilled a religious function that largely eludes us today, but probably involved fertility and rebirth as the figurines are often pregnant.

In the early 20th century, artists such as Picasso, Modigliani, and Brancusi admired and were deeply influenced by the Cycladic aesthetic in their work. The economy of form and reduction to essential geometry deeply resonated with the spirit of the time and contributed particularly to the development of Cubism. The constructivist shapes that articulate such images resonate deeply in the human psyche, evoking a direct and powerful reaction today as much as they did five thousand years ago.

The lot is accompanied by the original sale documents issued by the gallery, signed by its director, S. Ogden, and dated January 22, 1979, one of which mentions an appraisal of the head on August 22, 1975.

Dr. Charles Alexander Best was a member of the Canadian Parliament and a son of Dr. Charles Herbert Best, one of the co-discoverers of insulin.

Mrs. DuVal (Annette) Cravens (1923-2017) belonged to a distinguished philanthropic family from Buffalo, New York. She donated most of her archaeological and ethnographic collection to the State University of New York at Buffalo, where it is now publicly displayed.

For expertise, condition, and provenance enquiries, please contact Luciano deMarsillac at [email protected], or at 917-523-0900 (+1 from outside the United States).