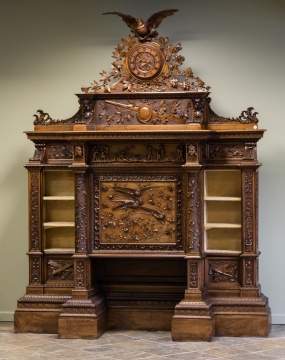 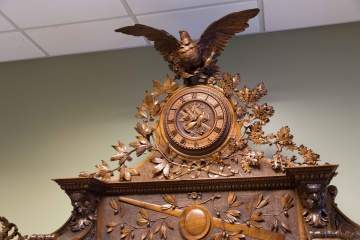 Industrial magnate John Wesley Bookwalter (1837-1915) specially commissioned this masterfully carved Italian walnut secretary from Luigi Frullini (Italian, 1839-1897), one of Italy’s most celebrated and sought-after artisans of the late 19th century. Lauded for his adept mastery of the Italian Renaissance style, attention to detail, and exquisite renderings of nature, Frullini was awarded the French Légion d’Honneur and the Italian Cross of the Knights of the Crown. He exhibited at various World Fairs and Expositions beginning in the 1860s before becoming the preferred artisan of the international elite in the 1870s for fine wood furnishings and sculptural decoration, most notably in the interiors of the Newport mansion Chateau Sur Mer. America’s burgeoning class of industrialists and financiers sought to surround themselves with homes befitting their newfound wealth and status. Turning to the Italian Renaissance for inspiration, the resulting American Renaissance style that emerged would become synonymous with the excesses of the Gilded Age.

The extensive classical iconography used throughout the secretary clearly communicate Bookwalter’s intellectual and cultural élan in his various roles as a writer, scholar, world traveler, collector, politician, landowner and developer, in addition to his considerable wealth and societal prestige. A substantial classically-inspired pedestal base gives rise to a central desk panel featuring four doves mid-flight amongst a low relief field of delicately carved flowers and insects and framed in a band of foliage. Columns delicately encircled with ivy are topped by two busts of Italian masters representing art (Raphael, right) and literature (Dante, left). The portraits in turn flank a central frieze of cherubs in a woodland setting engaging in the four central themes of the secretary, from left to right: art, literature, astronomy, and surveying. Recessed bookshelves on either side of the central desk are flanked by pilasters in floral and arabesque relief, flaunting smaller panels featuring emblems of art (brushes and palette) and literature (parchment and quills). The top of the mantle similarly boasts panels symbolizing astronomy and surveying: a telescope and globe motif entwined in olive branches flanked by ornately carved supports lead to a clock face with central medallion containing a draftsman’s square, compass, ruler, and hourglass. An informal fifth theme of leadership crowns the structure, as an alighting dove above the clock face is supported by gracefully arching branches of laurel and oak, representing glory and heroism.

Rovner, Nicole Nicas. The Neo-Renaissance Style and The Victorian Interior: The Expression of Identity in the Library at Chateau-Sur-Mer, Newport, Rhode Island. Newport: Preservation Society of Newport County, 2010 and 2014. Accessed February 5, 2018: http://www.newportmansions.org/documents/learn/luigi%20frullini%20paper.pdf

Italian walnut; carved by Frullini, Florence. Covered with exquisitely carved panels and borders of flowers, leaves and conventional figures. On the main panel are four doves in flight. A dove with outstretched wings surmounts a dial face above the secretary, about which are delicately carved branches of oak and laurel.”